Adapting to higher fibre counts in the data centre 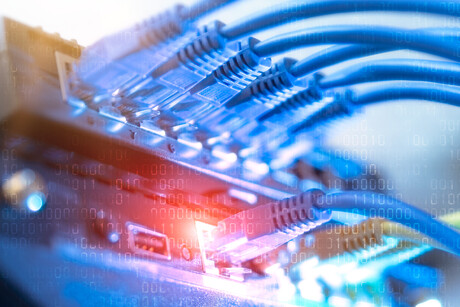 The volume of digital traffic pouring into the data centre continues to climb; meanwhile, a new generation of applications driven by advancements like 5G, AI and machine-to-machine communications is driving latency requirements into the single-millisecond range. These and other trends are converging in the data centre’s infrastructure, forcing network managers to rethink how they can stay a step ahead of the changes.

Traditionally, networks have had four main levers with which to meet increasing demands for lower latency and increased traffic:

While data centres are using all four approaches at some level, the focus — especially at the hyperscale level — is now on increasing the amount of fibre. Historically, the core network cabling contained 24, 72, 144 or 288 fibres. At these levels, data centres could manageably run discrete fibres between the backbone and switches or servers, then use cable assemblies to break them out for efficient installation. Today, fibre cables are deployed with as many as 20 times more fibre strands — in the range of 1728, 3456 or 6912 fibres per cable.

Higher fibre count combined with compact cable construction is especially useful when interconnecting data centres (DCI). DCI trunk cabling with 3000+ fibres is common for connecting two hyperscale facilities, and operators are planning to double that design capacity in the near future. Inside the data centre, problem areas include backbone trunk cables that run between high-end core switches or from meet-me rooms to cabinet-row spine switches.

Whether the data centre configuration calls for point-to-point or switch-to-switch connections, the increasing fibre counts create major challenges for data centres in terms of delivering the higher bandwidth and capacity where it is needed.

The progression of fibre and optical design has been a continual response to the need for faster, bigger data pipes. As those needs intensify, the ways in which fibre is designed and packaged within the cable have evolved, allowing data centres to increase the number of fibres without necessarily increasing the cabling footprint. Rollable ribbon fibre cabling is one of the more recent links in this chain of innovation.

Rollable ribbon fibre cable is based, in part, on the earlier development of the central tube ribbon cable. Introduced in the mid-1990s, primarily for OSP networks, the central tube ribbon cable featured ribbon stacks of up to 864 fibres within a single, central buffer tube. The fibres are grouped and continuously bonded down the length of the cable, which increases its rigidity. While this has little effect when deploying the cable in an OSP application in a data centre, a rigid cable is undesirable because of the limited routing restrictions these cables require.

In the rollable ribbon fibre cable, the fibres are attached intermittently to form a loose web. This configuration makes the ribbon more flexible, allowing manufacturers to load as many as 3456 fibres into one two-inch duct, twice the density of conventionally packed fibres. This construction reduces the bend radius, making these cables easier to work with inside the tighter confines of the data centre.

For decades, nearly all telecom optical fibre has had a nominal coating diameter of 250 microns. With growing demand for smaller cables, that has started to change. Many cable designs have reached practical limits for diameter reduction with standard fibre. But a smaller fibre allows additional reductions. Fibres with 200-micron coatings are now being used in rollable ribbon fibre and micro-duct cable.

All servers within a row are provisioned to support a given connection speed. But in today’s hyperconverged fabric networks, it is extremely rare that all servers in a row will need to run at their max line rate at the same time. The difference between the server’s upstream bandwidth required and the downstream capacity that’s been provisioned is known as the oversubscription or contention ratio. In some areas of the network, such as the inter-switch link (ISL), the oversubscription ratio can be as high as 7:1 or 10:1. A higher ratio is chosen to reduce switch costs, but the chance of network congestion increases with these designs.

Oversubscription becomes more important when building large server networks. As switch-to-switch bandwidth capacity increases, switch connections decrease. This requires multiple layers of leaf-spine networks to be combined to reach the number of server connections required. Each switch layer adds cost, power and latency, however. Switching technology has been focused on this issue, driving a rapid evolution in merchant silicon switching ASICs. On 9 December 2019, Broadcom began shipping the latest StrataXGS Tomahawk 4 switch, enabling 25.6 Tbps of Ethernet switching capacity in a single ASIC. This comes less than two years after the introduction of the Tomahawk 3, which clocked in at 12.8 Tbps per device.

These ASICs have not only increased lane speed, they have also increased the number of ports they contain. Data centres can keep the oversubscription ratio in check. A switch built with a single TH3 ASICs supports 32 400G ports. Each port can be broken down to eight 50GE ports for server attachment. Ports can be grouped to form 100G, 200G or 400G connections. Each switch port may migrate between one pair, two pairs, four pairs or eight pairs of fibres within the same amount of QSFP footprint.

While this seems complicated, it is very useful to help eliminate oversubscription. These new switches can now connect up to 192 servers while still maintaining 3:1 contention ratios and eight 400G ports for leaf-spine connectivity! This switch can now replace six previous-generation switches.

The new TH4 switches will have 32 800Gb ports. ASIC lane speeds have increased to 100G. New electrical and optical specification are being developed to support 100G lanes. The new 100G ecosystem will provide an optimised infrastructure which is more suited to the demands of new workloads like machine learning or AI.

The evolving role of the cable provider

In this dynamic and more complex environment, the role of the cabling supplier is taking on new importance. While fibre cabling may once have been seen as more of a commodity product instead of an engineered solution, this is no longer the case. With so much to know and so much at stake, suppliers have transitioned to technology partners, as important to the data centre’s success as the system integrators or designers.

Data centre owners and operators are increasingly relying on their cabling partners for their expertise in fibre termination, transceiver performance, splicing and testing equipment, and more. As a result, this increased role requires the cabling partner to develop closer working relationships with those involved in the infrastructure ecosystem as well as the standards bodies.

As the standards surrounding variables such as increased lane speeds multiply and accelerate, the cabling partner is playing a bigger role in enabling the data centre’s technology roadmap. Currently, the standards regarding 100GE/400GE and evolving 800Gbs involve a dizzying array of alternatives. Within each option, there are multiple approaches, including duplex, parallel and wavelength division multiplexing — each with a particular optimised application in mind. Cabling infrastructure design should enable all of these alternatives.

All comes down to balance

As fibre counts grow, the amount of available space in the data centre will continue to shrink. Look for other components, namely servers and cabinets, to deliver more in a smaller footprint as well. Space won’t be the only variable to be maximised. Combining new fibre configurations like rollable ribbon fibre cables with reduced cable sizes and advanced modulation techniques, network managers and their cabling partners have lots of tools at their disposal. They will need them all.

If the rate of technology acceleration is any indication of lies ahead, data centres, especially at the hyperscale cloud level, had better strap in. As bandwidth demands and service offerings increase, and latency becomes more critical to the end user, more fibre will be pushed deeper into the network.

The hyperscale and cloud-based facilities are under increasing pressure to deliver ultrareliable connectivity for a growing number of users, devices and applications. The ability to deploy and manage ever higher fibre counts is intrinsic to meeting those needs. The goal is to achieve balance by delivering the right number of fibres to the right equipment, while enabling good maintenance and manageability and supporting future growth.

*Jason Bautista is a Solution Architect for Hyperscale and Multi-Tenant Data Centers at CommScope.

^Kenneth Hall is a Data Centre Architect for North America at CommScope.